Originally published in Nationalism Today, May 1983

THE CURRENT sordid row over whether the film Gandhi shall be shown to all-White or racially mixed audiences in South Africa, and if so whether its author, limousine-liberal drone Richard Attenborough, will grace the proceedings with his presence, epitomises the total corruption of the original vision of apartheid by the pathetic heirs of the original visionaries now ruling South Africa.

For when the National Party first won power, in 1948, on a pledge to institute a policy of 'separate development' ― apartheid in Afrikaans - it did not mean keeping the kaffirs outside whilst an all-White audience watched multiracialist propaganda. Nor did it mean 'Whites-only' public toilets, park benches and all the other petty paraphernalia of trivial harrassment the liberal media love to portray as they depict White South Africans as small minded bigots.

The vision of the NP's great thinkers, Dr. Malan, Advocate Strijdom, and Dr. Verwoerd, was far grander and far more deeply rooted in a profound understanding of human nature. They wished to build an abiding White nation on the soil of Southern Africa, one that would last not “until the Blacks are ready for majority rule” but forever. To achieve that, they knew they must aim ultimately not at a White minority living on the backs of teeming hordes of Black serfs but at a White people tilling its own land, working its own mines and industries, and completely separate from the Black population. That was their ultimate aim.

To achieve that aim required two stages. In the first stage, the continued survival of the White South Africans as a people must be assured whilst they disentangled themselves from dependence upon the Blacks in their midst. As the 1948 National Party Manifesto put it, the first priority was "the preservation of the White population of South Africa as a pure White Race by means of the prohibition of every form of race-mixing between White and non-White".

To this end, as long as Blacks lived or worked in White areas and vice versa, measures had to be taken to minimise all social - and hence sexual - contact between the races. Hence the Immorality Act prohibiting interracial sex, and the sundry 'pass', 'zoning' and other laws designed to keep the races as far as possible apart whilst they still live in the same area. But all of this, which is regarded generally as the whole of the apartheid policy is in fact only a transitional first stage in the grand design of the founders of modern South Africa.

The second and final, stage envisaged not only the legal but the physical separation of the races. Ultimately South Africa would have been divided into areas inhabited, and worked in, solely and entirely by Whites, and similar exclusively inhabited by the various Black tribes as well as areas for the hybrid but culturally cohesive 'Cape Coloured' people and the Asians. From this might evolve an English-speaking White nation centred on the Cape and an Afrikaner nation on the highveld, each comprised entirely of White workers and farmers without a single Black 'houseboy' or miner, together with areas in which the Blacks could live in freedom as they always used to live, in harmony with the land and with their cultures, religions, and tribal ways of government.

Since Black and White would hardly ever meet, and would be divided by yawning gulfs of language and culture when they did, the structure of petty apartheid would effectively become obsolete. The Whites would no longer rule over or exploit the Blacks, who would be free to develop their own racial and cultural identity, rather than being turned into second-class imitation Whites, wearing the White man's clothes, worshipping the White man's god and generally aping the White man's civilisation, in which they must necessarily be inferior, just as Whites would make second-class Negroes.

But, whilst the first stage of the Grand Design, as its authors themselves syled it, was effectively implemented within a decade,the second stage, the entire purpose of the whole policy, has been totally abandonded by the present rulers of South Africa. The few token 'homelands' like the Transkei and Bophutatswana are imitation White countries like the rest of Black Africa in so far as they are independent at all, and are totally exploited by White - or Jewish - plutocrats (Bophutatswana is little more than a giant interracial brothel). Most Blacks do not live in the 'homelands' anyway, because they are exploited by White South African industry as cheap labour in dismal conditions.

The result is that the laws passed as the first stage of apartheid stand bereft of purpose. The Government evidently has lost the original vision that fired its Party's founders as was evident when the Prime Minister, P.W. Botha, told the BBC on 29th May 1979 that in his view “Morally and religiously there is nothing against a racially mixed marriage”, and when NP minister Pik Botha said “Discrimination based on the colour of a person's skin is indefensible. We (the S.A. Government) shall do everything in our power to move away from discrimination on grounds of race or colour”. 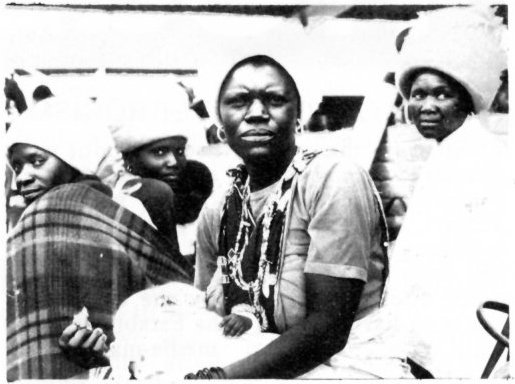 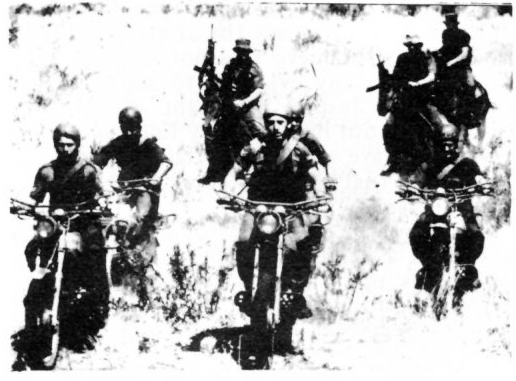 South African troops in "hot pursuit". The only future for Whites in South Africa lies with a return to the original vision of apartheid.

What went wrong? Why did a brave and potentially glorious dream die? The reason is that the founders of apartheid failed to perceive the nature of the forces that would be ranged against their vision. They were aware of the Communist threat, and in 1950 moved to eradicate ruthlessly the S.A. Communist Party. But they failed to see that international Capitalism was as great a threat as international Communism.

For the interests of Capitalism, the road to quicker and bigger profits, did not lie in separating the Blacks and allowing them to live their own lives in peace. Instead they lay in dragging the Negroes out of their ancestral villages, stripping them of their traditional tribal way of life and herding them into vast soulless 'townships' like Soweto near Johannesburg. There they could provide the plutocrats with an endless pool of cheap and hence profitable sweated labour.

The Capitalists also encouraged first missionary and then State schemes to 'educate' the Blacks so they could read the operating instructions on their machines and do clerical work. The end result, of course, is to create a rootless and disaffected generation of young Blacks who have lost their own identity without gaining the White identity held up to them as a model, and hence easy meat for the purveyors of Marxism and Black revolution.

Thus from the beginning it was Capitalists like Harry Oppenheimer who set out to undermine the Grand Design of apartheid. In this they were aided by the Jews, who make up 15% of the 'White' South African population and who have never felt safe in a racially and culturally based society unless it is their own. It was Oppenheimer and Co. who founded and financed the anti-apartheid Progressive Federal Party, led by Jews like Helen Suzman, and Capitalists who urged NP leaders to delay the final separation of the races, and in particular the removal of the Blacks from the mines and factories, “because of the economic dislocation which would be caused”. Now they openly say that “South Africa's economy needs more educated Blacks and an end to racial discrimination”. NP leaders who would not be thus corrupted could be, as Dr. Verwoerd was, murdered or ousted from office.

The lesson to be learned, if White South Africa is to be saved, is that those who wish to save it, like the HNP, must not primarily seek to set the clock back to the 'good old days' when Blacks were totally kept off White park benches and out of White restaurants. They must seek instead to set the clock forward, to restore and realize the great vision of Malan, Strijdom and Verwoerd, the vision of the separate development of the races and peoples of Southern Africa in their own ways on their own soil.

And they must deal ruthlessly with all the enemies of that vision, with Capitalists as well as Communists, with Jewish Zionists as well as Black Marxists, for the Grand Design of apartheid is as valid now as it ever was. And it is the only alternative to revolution, tyranny and ruin for both White and Black in South Africa.