RoR is an archive of materials released under these publications: Heritage & DestinyNationalism TodayVanguardBooks & booklets

TOWARDS A RE-UNITED GERMANY

What is perhaps most worrying for the Soviet Union is the improvement in relations between 'communist' East Germany and 'capitalist' West Germany.

Over the last twelve months or so there has been an almost continual flow of West German politicians to the East German capital in East Berlin. And considerable progress has been made on three specific fronts, namely cultural and scientific exchanges, easing of border currency restrictions and the removal of automatic-firing shrapnel guns from some areas along the border.

What makes this improvement in relations even more remarkable is that it comes at a time when general relations appear to be deteriorating.

This apparent paradox was summed up in a recent lead editorial of The Guardian: "For the first time since the division of Germany, relations between the two German states and those between the two superpowers are developing in diametrically opposed directions".

On top of this, former West German Chancellor, Helmut Schmidt, speaking in the Bundestag in the early winter, said: "The more the two world powers conduct themselves antagonistically, the closer the people of the western parts of middle Europe and of the eastern parts move together and the closer the Germans come together in both parts of the Fatherland".

But it is now just the West Germans who have been working towards German unity. The East Germans too have been seeking greater co-operation. For instance when the Soviet Union applied pressure on the East German state to come to the aid of Poland, East Germany replied that it would not be possible to help Poland without the assistance of West Germany.

However, prospects for ultimate German reunification in the face of hostility from the superpowers would be doubtful if left solely to the designs of the corrupt politicians who currently rule in both German states. In the end, all hopes of unity must rest with the ordinary German people and there are a growing number of Germans who are beginning to demand just this.

Manifestations of the new German Nationalism have been noticeable on both sides of the border, though more so in the west. 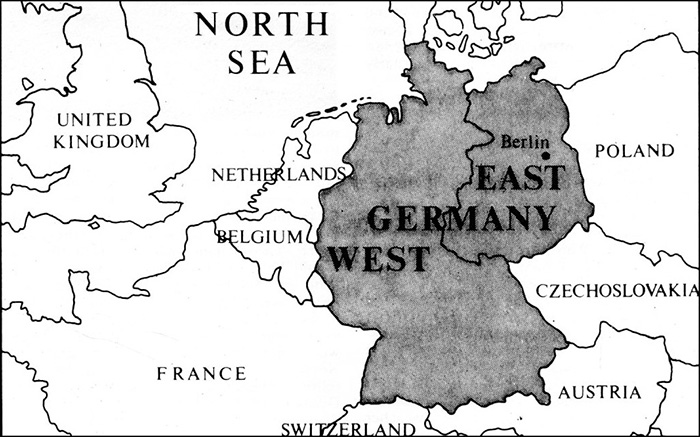 Guenter Verheugen, an influential Bonn MP, told the Sunday Times that he was worried about the growth of Nationalism in Germany. "Deployment of missiles is one thing", he said. "I am against it and so are three quarters of the German population. But there is a new mass feeling here that can change the political structure of the country. It isn't simply anti-rocket. It mixes issues of peace and neutrality, ecology and acid rain, unemployment and alternative economics. It has a xenophobic patriotism that appeals to the traditional right as well as the left.

"The key issue at Cologne will be whether we drift beyond Pershings towards a position that is against the alliance. That might be popular with the grass roots. It would also be very dangerous."

It would indeed by very dangerous for corrupt establishment politicians like Verheugen, who might well find himself out of a job if the new German Nationalism takes root. However, a position of armed neutrality, free from both the Warsaw Pact and Nato, would do wonders for the self respect of a nation that has been under foreign domination for far too long.

And it would appear that Verheugen and others like him do indeed have cause for concern, because the anti-rocket movement in West Germany is getting support from all sections of the German population. Even the West German army has not escaped the wave of anti-American and strongly pro-German sentiments which are sweeping through the country. German soldiers have held demonstrations against the deployment of American Cruise and Pershing 2 missiles in Europe, a development that has intensely worried the politicians.

Also, the West German peace movement, in marked contrast to the CND in Britain, has begun to talk of a "new patriotism" in an appeal to Nationalist sentiment. Even the traditional left/right divide in German politics has begun to drop away as neo-Nazis begin to forge links with left-wing groups with the intention of forming an anti-American alliance.

With the recent disclosures that Nato is prepared to withdraw from West Germany in the event of a conventional war with the Warsaw Pact, leaving the whole country defenceless, it is small wonder that more and more Germans are learning to distrust their so-called American 'allies'.

The development of the new Nationalism in Germany is a result of the legitimate demand of the German people to national self-determination without the interference of either super-power. It is a development which was foreseen as long ago as 1969 by Otto Strasser, who predicted quite correctly that “soon there will be a great explosion of Nationalism in German. It is inevitable. The mood of the country is right for it now. I don't know anybody who is happy, although they might be materially well-off.”

“You can't keep a country divided for ever ever ... The people need a goal ― Nationalism and a reunited Germany.”

Strasser made these predictions during an interview published in the Sunday Express on May 25th, 1969. But he did more than foretell the future. He also outlined the policies a Nationalist Germany should follow: "We will kick all Nato forces out of Germany ... In return, Moscow must give back to Germany all the land that it took from us in 1945."

And Strasser even had a message for the British people, at the time, a message which is as relevant now as it was then: "I like the English very much. As much as I dislike the Americans. But Britain is just a domestic version of Washington and Wall Street. Britain could do nothing but go along with America."

Otto Strasser was preaching his view of German Nationalism in the 1920's and he was still preaching it right up until his death in 1974. Now, ten years on, Germany is at last beginning to heed his words.