RoR is an archive of materials released under these publications: Heritage & DestinyNationalism TodayVanguard

FOR YEARS the National Front has pointed out that the 'anti-fascist magazine' Searchlight is a tissue of fantasy, fabrication and often downright deliberate lies which should not betaken seriously by anyone seeking the truth about British Nationalism. But then, we would say that, wouldn't we?

However we can prove it. Indeed for a classic example of the depths of bare-faced falsehood plumbed by Searchlight and its editor, convicted burglar Gerry Gable, we need look no further than their response to some home truths about their own sordid and sinister associations revealed in Vanguard issue 4. These concerned one Harry Bidney, a former associate of Gable and other Searchlight staff in a gang of thugs called the '62 Group'. Although Bidney was given a glowing obituary in Searchlight issue 111 (September 1984) we revealed his criminal background as a notorious homosexual paedophile and pimp. Instead of an embarrassed silence, let alone a disavowal of Bidney, Searchlight responded thus:

This taken from Searchlight issue 140 (September 1987 p.15), is itself "the most remarkable catalogue of pure invention", which, unlike more subtle 'Searchlies' can easily be proved untrue.

The most crass lie is, of course, the pathetic attempt to consign Sidney's sordid criminal past to some sort of 1984-style 'memory hole': 'utterly fabricated', 'never dared print it while he was alive' etc. Well here is what the London Evening Standard and the Daily Telegraph did print about a very much alive H. Bidney on August 5th and 6th respectively, 1977: 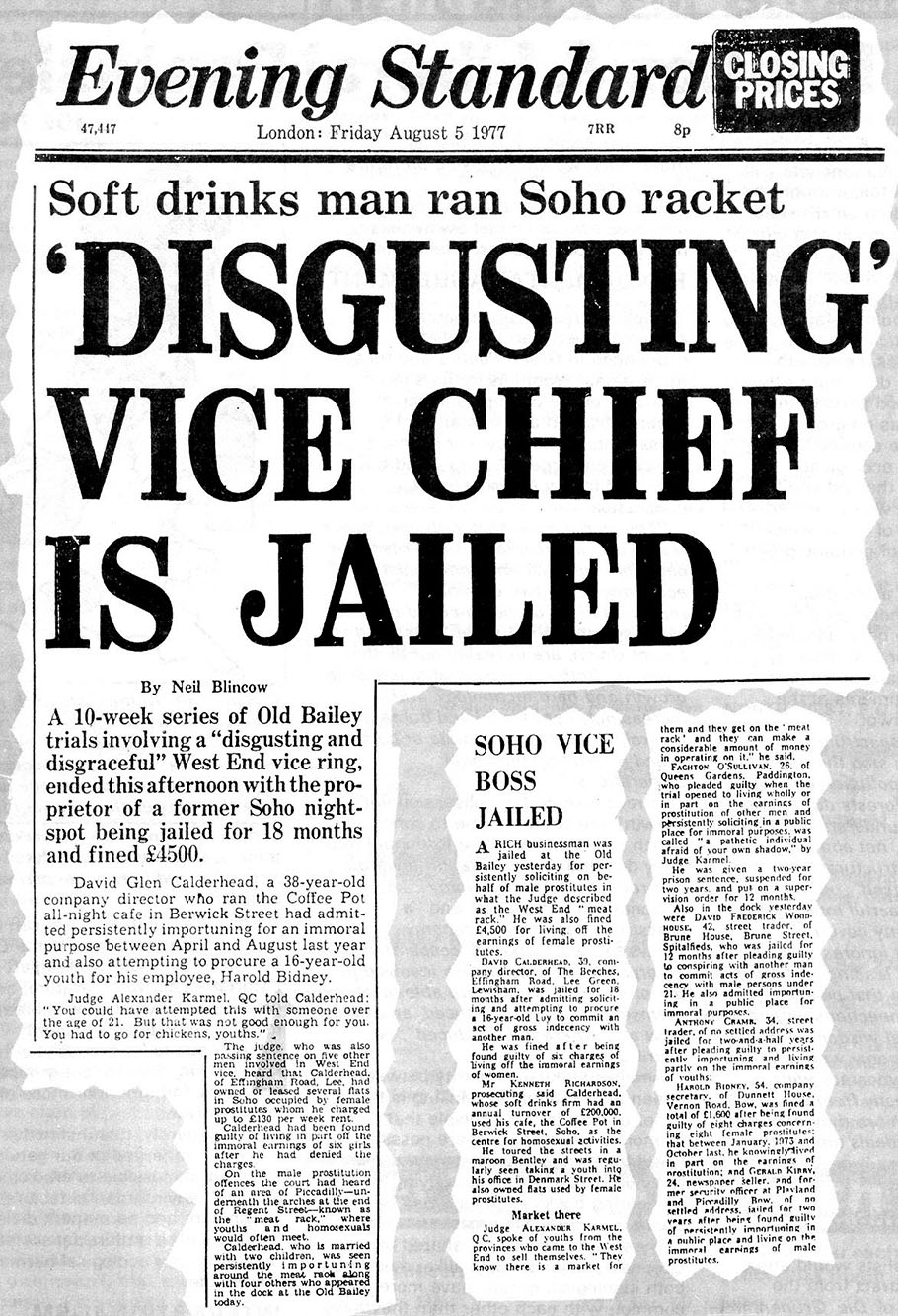 This Bidney was one of those 'persistently importuning' for young boys at the notorious Piccadilly 'meat rack', and his boss Calderhead – another key 'anti-fascist' incidentally – admitted trying to procure a 16 year-old boy for the Searchlight super hero Bidney. The sordid details of Sidney's sexual predelictions emerged, not from the dark dripping recesses of anyone's mind, but in the cold bright daylight of an Old Bailey witness box.

Nor was this Bidney's only brush with the Courts during what Searchlight, June 1987, described as his 'long and honourable life fighting fascism and racism' – earning a living as a pimp, petty Soho gangland thug, homosexual paedophile and sidekick of 'disgusting and disgraceful' vice boss Calderhead and, before him, Fifties Soho gang boss Jack 'Spot' Comer, who could with some accuracy be described as the 'Godfather' of Searchlight's 'anti-fascist movement'.

In the light of all this. Searchlight's original Bidney obituary takes on a certain ironic humour. It's author isn't kidding when he remarks 'there were sides to Harry that people never saw!' Said eulogy, though written in the first person, is penned anonymously. Hardly surprisingly, most people would probably rather not put their names to a glowing tribute to a notorious paedophile and importuner of young boys which begins "I first met Harry when I was 12 years old" and ends "Well, Harry, I didn't go home that night ... !"

In fairness all political organisations have their black sheep. People of every political persuasion and affiliation have been convicted of, or exposed, as virtually everything under the sun. But when scum like Bidney surface in their ranks, there can be few groups who would respond, not with explusion, forced resignation or shunning, but with transparent lie, feeble cover-up and posthumous lionising of the sordid specimen. But evidently that's the sort of people Searchlight are.

Finally, they lie about themselves, trying to wriggle out of the highly expensive mess they helped land the BBC in over its imfamous Panorama (or Paranoia) programme 'Maggie's Militant Tendency'. After gloating throughout the months after this effort hit the screen they scuttled hastily away when the victims sued and the BBC had to shell out half a million quid. No doubt the credits to Searchlight in general and Gable in particular appearing at the end of the offending programme were more 'pure inventions' (optical illusions perhaps).

This is not the only example of reporters coming to grief through putting their trust in Searchlies. For example, on one occasion Gable, who as we have seen is very free with imputations about other peoples' sanity, got it into his head that Mr Gerald Howarth, Conservative MP for Cannock and Burntwood and Mr Richard Unwin of Unwins Fireworks were 'plotting to kidnap and murder him'. A lurid Searchlie followed. Private Eye rashly rushed in and repeated Gable's ludicrous libel. Whereupon Messrs Howarth and Unwin sued and on May 21st 1987 received 'substantial' damages from the Eye, which accepted that the story was utterly false (Guardian 22nd May 1987). Incidentally, the reason the MP and the fireworks factory owner allegedly wanted 'BBC Researcher' Gable dead was supposedly because Gable could be such a vital witness for the BBC in defending the libel actions brought by Mr Howarth and others over the 'Maggie's Militants' Panorama programme which of course Gable now claims he new nothing about! Oh what a tangled web we weave ...

This is the trap Searchlies sets for the unwary hack. Because Gable's comic has a tiny and obscure circulation (were it not for the copies he sent to the media no-one would ever have heard of it), has no assets and is run by 'men of straw', suing it would be an expensive waste of time, so its victims generally ignore its ravings. It is when those Searchlies pop up in more credible, or at least wider-circulation, organs that the victims pounce with a writ. The moral of the story is plain. As we have proved, Searchlight prints lies. It is therefore a highly dangerous research resource, as journalists have found to their cost. So Mr. Reporter, next time a Searchlie lands on your desk, drop it in the bin where it belongs, and check your facts yourself. Doing otherwise could, literally, be more than your job's worth...